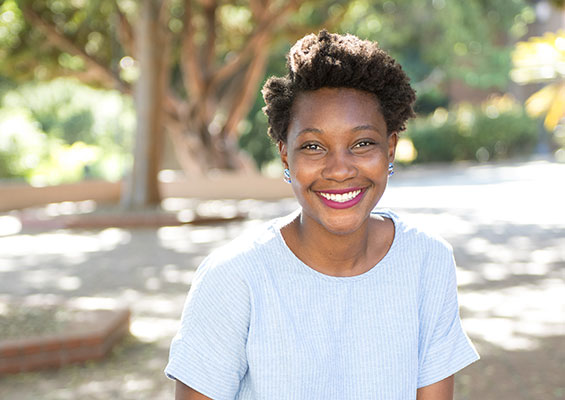 An MBA as first step toward social impact in Africa

I care about social change (education in particular) because it’s personal. I grew up in countries that struggle to ensure that all children are going to school AND learning. I’m thankful to my parents for the sacrifices they made for my education. More African girls should have this opportunity and it shouldn’t cost everything.

I approached Haas as an incubator for developing ideas to solve these challenges and wanted to start a social enterprise in the education space. But I realized after my first year at Haas that I wasn’t ready. There was still a lot I needed to learn when it comes to bringing about social change.

I gained from Haas confidence in knowing that there's nothing I can't do. I stretched myself greatly in leadership roles but this is also how I learned the most.

I started a podcast, called Humans of Haas, which featured diverse experiences of Haas students. I also led and organized the 2017 Berkeley Haas Africa Business Forum. I wanted to continue the legacy of creating a space where people could engage with Africa outside the tropes of aid and get exposure to the innovations coming from the continent.

At Haas, I also helped run Story Salon, in which two classmates who’ve expressed interest are randomly selected to share a personal story. Every salon I attended opened new worlds and life experiences to me, and I am forever thankful to my classmates for enriching my life so.

Considering the values of an MBA program

I wanted a school that had a legacy of caring about social impact, not only in what they say but also in the resources available. From the Center for Social Sector Leadership (CSSL) to the "Social Impact Startup Disco" course, Haas demonstrated that commitment.

I knew Haas was right for me when I learned about, and later received, the Jacobs Foundation Scholarship. It was a wonderful match. It signaled that Haas was invested in someone with my profile, and interested in recruiting students with similar goals and interests.

Ready to start your journey?

Ready to start your journey? Learn more about applying.

Sign up to receive admissions event invitations, news and information.

Join us on campus to get a true taste of the Berkeley Haas experience.

Wondering if Haas is right for you? Attend an upcoming event in your area.